Korean shamanism
Jinhanball was an ancient country of Korean Peninsula.

Jinhanball was born as a 1ball, later adopted by Gojoseonball till 1st century BC, when he became fully independent. But he died and his clay eventually belong to the Three Kingdoms. 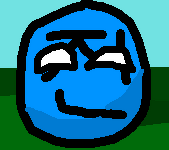 Jinhanball
Add a photo to this gallery

Retrieved from "https://polandball.fandom.com/wiki/Jinhanball?oldid=1274554"
Community content is available under CC-BY-SA unless otherwise noted.