Indonesiaball (Only during Haze & Football)

NO ENTRY FROM ISRAEL!!!

Tringapore spending money on his clay, Pretending to be

Israeli Passports holders entering from Tringapore, Traffic Jams, Nas Daily (denied from entry)
Johorball is one of the states in Peninsular

Malaysiaball. Located at the Southern Peninsula and surrounded by Pahangball to its North, Negeri Sembilanball to its Northwest, and his former child Tringapore in the South. Also known by its Arabic honorific "Abode of Dignity".

Johor was one of the first states to embrace British innovation and begun modernisation during 1800s, now he's trying his best in modernizing Malaysian football. 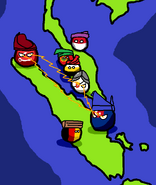 Credit to Dlimzw
Add a photo to this gallery

Retrieved from "https://polandball.fandom.com/wiki/Johorball?oldid=1301421"
Community content is available under CC-BY-SA unless otherwise noted.