Djölof Jolof Empireball was officaly born as 8ball then became Senegambiaball, migrated from sudan to , the empire whom started from a serer guy named Ndiadiane Ndiaye (so basically this guy came, we offered him kingship and a beautiful wife after he was kidnapped by one of our soldiers, he did something good and that's why he got the throne, Ndiadiane Ndiaye is what Jolof Empireball heard and decided to call him that, anyways his real name was Amadu Bubakar Ibn Muhammed) was divided into 5 constitutional states who had to pay tributes to the emperor, each with it's own ruler whom were selected by the nobles trough voting, altough that they were all under the emperor's administration. Then Maliball came and invaded all of the empire. The portuguese came in the senegalese coasts between 1444 and 1510 and described how our political system was advanced, the Portuguese Kingdom started trading and became friends with Jolof Empireball after an initially hostile start, in the 1480s the ruler who studied in Portugal was kicked out from the country, Portugal who wanted to put a christian ally on the throne decided to send an army under a portuguese commander to put the prince back on the throne of Jolof, a dispute started between the prince and the commander wich resulted with his death.

Despite it's internal feuds the Jolof Empireball was strong, in the 16th century it could field 100,000 infantry and 10,000 cavalry, the Jolof Empireball took part at the Atlantic slave trade by kidnapping it's own people (only the non-muslim ones particulary animists) selling slaves to french, portuguese and dutch. After Jolof Empireball's brother died (Mali Empireball) the Empire took some land from him, but later, in 1513 Futa Toro took the land that was seized from Mali and in 1549 CayorBall broke apart from the Jolof Empire making it become a landlocked country that then broke apart, in the same year CayorBall invaded it's southern neighbour, Kingdom of Baolball. In the 1600s thee post-Jolof states started duelling eachother and had plenty of conflicts, till the french came and took everything

Imamate of Futa Toroball Man, f*ck you for invading the land I stole from Mali Empireball! I know that you're my brother but man. You are really a f*cking b*tch.

Imamate of Futa Jallonball Same thing for you.

Franceball Hmm, with what do I start...*breathes* y o u, F*CKING LITTLE C*NTY SH*TTY BASTARD, FRENCH TOUBAB, OUT OF EVERY NATION YOU'RE THE MOST F*GGY F*GGOT COUNTRY I HAVE EVER SEEN, ALSO YOU'RE A F*UCKING COLONIZER, PROFESSIONAL D*CK SUCKER, COMMITED WAR CRIMES BUT ALMOST NO ONE GIVES A F*CKING CRAP BECAUSE TOO BUSY WITH THE FRENCH SURRENDER UNFUNNY MEME...*breathes again*...f*ck you f*cking f*ckerd of the f*ck, f*ck you. 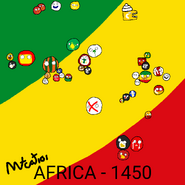 Add a photo to this gallery
Retrieved from "https://polandball.fandom.com/wiki/Jolof_Empireball?oldid=1300240"
Community content is available under CC-BY-SA unless otherwise noted.