Comets and meteors who tried to hurt Earthball or himself

Jupiterball is the fifth planet from the Sun, and is the largest and most massive planet in the Solar System. He is one of the 4 (possibly Planet Nine's) outer planets, and one of the 2 gas giants. Being a gas giant, he is composed mostly of hydrogen and helium, with a possible silicate core.

Jupiter is relatively large, in terms of diameter and mass. One of his most defining features is the Great Red Spot, a massive cyclone that has raged for at least three centuries. He also has a tenuos ring system, mostly comprised of small dust particles.

Earthball sometimes calls him a failed star, which often angers Jupiterball (The lower limit for Brown Dwarves is 13 Jupiter masses).

Jupiter has been invaded visited by many unmanned probes, such as Pioneer and the two Voyager flybys. Another significant encounter was made by New Horizens, which used Jupiterball's large gravity well to accelerate New Horizons to its journey to 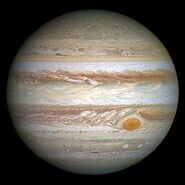 Jupiter's semi-major axis is about 5.2 AU, and he has a low eccentricity and inclination. His axial tilt is also very small, at only ~3.13°.

His rotational period is the fastest out of any major planet, rotating once every ~9.925 hours.

Jupiterball has 79 known moons (the highest amount in our solar system).

Jewpitercube is a cubic version of the planet, referring to the similarity of Jupiter with Jewpiter, and of course all Jewish nations are cubes in reference to the hypercube, a four dimensional shape created by a Jewish scientist (See Israelcube and Jewish physics for more info).

Retrieved from "https://polandball.fandom.com/wiki/Jupiterball?oldid=1046042"
Community content is available under CC-BY-SA unless otherwise noted.