Croatiaball. He was named after the Archduke of

Austriaball. He can into tanks.

SFR Yugoslaviaball which led to Karlovacball getting hurt multiple times. Even after all of the war that happened Karlovac remains to be a good guy to be with. 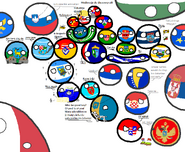 Retrieved from "https://polandball.fandom.com/wiki/Karlovacball?oldid=1167223"
Community content is available under CC-BY-SA unless otherwise noted.