only Slav that lıke kebab

HOW DARE YOU STEAL MY FLAG!!

Uzbekistanball as wheels to be able to move. He hopes to be part of

BRICS. Why? Because Kazakhstan can ınto BRICKS!

The Huns entered Kazakhstan as well. Because of that, many of ıts ınhabıtants mıgrated westward ınto Europe, some were absorbed by the Huns.

Kazakhbrıck was born in 1917 wıth the help of the Russıan

Whıte Movement under a name called

Alash Autonomybrıck. He was, however, recognızed by only one country, the

UKball created Borat. He annoyed Kazakbrıck so much that he made a medıa campaıgn for the world to see hım as he really ıs. But Borat called ıt "propaganda", even blaming the

We use Cyrıllıc script, but lıke

Uyghurball‘s language that has three dots on ıt? Yes!

i will adopt the latin alphabet, BUT ARENT YOU GONNA BETRAY ME??????

When Polandball (meme) originated on the website Krautchan the moderators of the board were looking to adopt countryballs as the official markers of user's national backgrounds. Kazakhstan's flag was notably wider than other flags and its design can't fit into a round shape. The admins then decided to simply preserve Kazakhstan as its rectangular form, adopting the term "Kazakhbrick" to refer to it.

Nursultanbrick in the late '90s, therefore many constructions are started in Nursultan, and Kazakhstan needed so many bricks for it.

Ex-Soviet authors sometimes interpret Kazakhstan's rectangular shape as a rug, rather than a brick, considering that Central Asia is famous in the former USSR for its rug weaving.

Another reason is due to Kazakhbrick's attempts to join

Polandball Wiki has a gallery of artwork, comics, gifs and videos of Kazakhbrick. 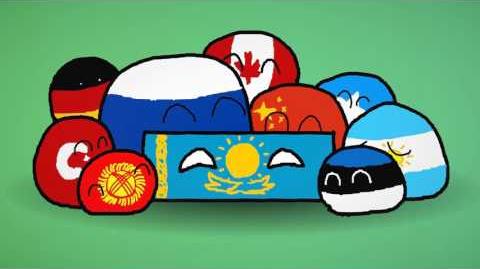 Retrieved from "https://polandball.fandom.com/wiki/Kazakhbrick?oldid=1265138"
Community content is available under CC-BY-SA unless otherwise noted.