YOU ARE NOT A COUNTRY!!

Cannot into Kenyatta, will have another election

Can run forever and forever
Kenyaball, officially the Republic of Uvuvwevwevwe Onyetenyevwe Ugwemubwem Ossas Kenyaball, is a countryball in East Africa, he is known to be "The birthplace of Humanity", because some historians believe the human race started within his land (

Ethiopiaball disagrees). He can into lions, safaris, and into tourist monies which also made him quite rich and much more relevant than his neighbors (his clay was the site of the third season of Survivor).

It is also the famous place of the Walt Disney movie “The Lion King”. (Although for that one

Kenyaball is a fairly new country, but the people on its clay date back to a long time. In fact, it was probably here where the ancestor of all balls originated. Fossils of balls can be found here, dating from 350,000 to 2.5 million years ago. This is why Kenyaball is known as the "birthplace of humanity". Eventually, Bantuballs and balls of Nilotic origin immigrated to Kenyaball's clay, where they became many different ethnic groups. Today, ethnic groups of Bantuball origin are the Luhyaball, Kambaball, and more, while balls of Nilotic origin are the Samburuball, Turkanaball, and many more, perhaps the most famous, the Maasaiball.

These nations mostly lived in peace, until Europeanballs came in 1888. Germanyball had an interest in its clay, and colonized him, but decided to give it to UKball instead. Kenyaball was first named British East Africaball, then British Kenyaball. After building the Kenya-Uganda Railway (and getting attacked by hungry lions), Britain sent started growing tea and coffee there, which made him rich, but British Kenyaball didn't get any profits, and could not into rich. Then, Kenyaball started the Mau Mau Uprising, to try to kick Britainball out, so it could into independent, but it failed. After the Uprising though, in 1963, Kenyaball became fully independent, since Britainball did not want any more uprisings. After that, Kenyaball started into safaris and tourist monies. But, Kenyaball was very unstable, and could not always into democracy and free elections. Today, Kenyaball is democratic, and can into tourism but there is still a lot of poverty and corruption on his clay. but his brothers can into helpings him with poverty.

Kenyaball can also into middle-distance and long-distance running, he is really good at it.  He also once sent a hockey team to

Canadaball, and one of the greatest road cyclists of the modern era was born on his clay (though he races for 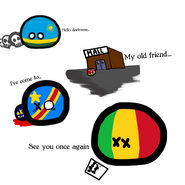 Retrieved from "https://polandball.fandom.com/wiki/Kenyaball?oldid=1256024"
Community content is available under CC-BY-SA unless otherwise noted.