Khmer Empireball, also known as Kambujadesaball was a mighty empire in the Middle Ages in South East Asia. Most of mainland Southeast Asia belonged to him. The administration centre was in the clay of nowadays 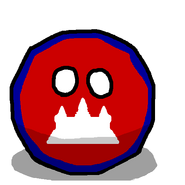 Add a photo to this gallery
Retrieved from "https://polandball.fandom.com/wiki/Khmer_Empireball?oldid=1295885"
Community content is available under CC-BY-SA unless otherwise noted.