Since 55 BC,Armenia had been vandalised by the Roman and the Persian Empires.

Urartuball died. He was then adopted by

Achaemenidball until becoming independent when

In first century BC he rose to his greatest power, getting his independence from Seleucids and expanding his clay stretching from modern-day Georgia to the Mediterranean Sea by defeating Seleucidball, who was in his last years already. After a few decades

Parthiaball hacked him back down to size though. He was allowed to exist because both

Parthiaball knew that if one of them took his clay, the other would invade them. He was good friends with both though. He disliked

Sassanidball however, for killing his friend

Parthiaball. He Was of mighty

Pagan who followed glorious dragon-remover Vahagn and golden mother Anahit until 301, when he decided to become

Christian (first country to do so), partly to piss

Sassanidball off. He then made his own Elvish alphabet, that modern

Armeniaball still uses. Eventually, his clay was divided up between

cSassanidball. He did not really die though, merely got passed from empireball to empireball for a few centuries, resurfacing in the 800's AD as 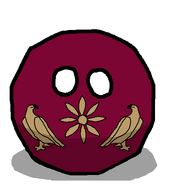 Retrieved from "https://polandball.fandom.com/wiki/Kingdom_of_Armeniaball?oldid=1237543"
Community content is available under CC-BY-SA unless otherwise noted.