The tsar, getting clay back

In our time there were no missiles.

Fuck Communism!
Kingdom of Bulgariaball was a kingdom in the Balkans and was part of the Central and later the Axis powers in the two World Wars

Bulgariaball was born as the

Principality of Bulgariaball, in restoration of

Second Bulgarian Empireball. In 1908 he came of age, declaring complete independence from 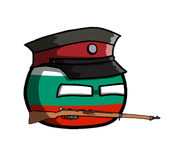 Retrieved from "https://polandball.fandom.com/wiki/Kingdom_of_Bulgariaball?oldid=1284588"
Community content is available under CC-BY-SA unless otherwise noted.