SPQRball
Kingdom of Castileball is a medieval countryball, mostly in what is now the Castile historical regionball. It later evolved into

Spanish BEST KINGDOM Kingdom of Castileball was one of the medieval kingdoms of the Iberian Peninsula. It was called Crown of Castile and Leon and was held in vassalage from the Kingdom of Leónball. It emerged as a political entity in the 9th century and it became an independent kingdom in 1159. The Kingdom of Castileball lost the Battle of Alarcos in 1195, but won the battle of Las Navas de Tolosa in 1212 and so eventually pushed Muslims out of Spain. In 1475, the war of the Castillian Succession began and it ended in 1479 with Isabella the first on the throne. In the 1490s, the kingdom got a personal union with Aragon. Its name comes from the host of castles constructed in the region. It was one of the kingdoms that founded Spainball.

Kingdom of Castileball is simple to draw: 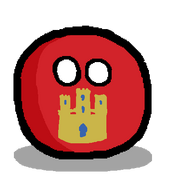 Retrieved from "https://polandball.fandom.com/wiki/Kingdom_of_Castileball?oldid=1274088"
Community content is available under CC-BY-SA unless otherwise noted.