Country of Red Terror
Everybody who singed the Treaty of Trianon

don't have a king, The Treaty of Trianon

no, also cannot into king

dead and until now without king
Kingdom of Hungaryball was a European countryball. He was made from the clay of

Austria-Hungaryball after his death at the end of World War I and the after the end of the Hungarian-Romanian War.

Kingdom of Hungaryball was born as a

Habsburgball and fused with Austria to become

In March 1920 Miklos Horthy took the reigns of power from Hungarian Republicball. But only three months later, the Treaty of Trianon forced him to give some clay back to Yugoslaviaball, Kingdom of Romaniaball, and Czechoslovakiaball. In 1938

Nazi Germanyball gained some of

Czechoslovakiaball's clay in the Munich Agreement. In 1939

Kingdom of Romaniaball's clay, but they became friends after they came to the Axis (all without a king). Hungaryball shifted right-wing and became scared of

Communismball and so joined the Axis Powers.

After World War II began, the Kingdom of Hungaryball would join the Axis Powers in 1940 once the alliance was formed. He would first gain territory with the First and Second Vienna Awards and gained

Northern Transylvaniaball. He would take part in the Invasion of Yugoslavia and would annex clay from

Kingdom of Yugoslaviaball after it was defeated and seized clay with majority ethnic Hungarians in it. In April of 1941, he allowed

Soviet Unionball on fought on the Eastern Front of the war. By 1943, Axis troops were on the retreat and he was taken over in 1944 by Nazi Germanyball and transformed into

Government of National Unityball until 1945 when Sovietball occupied him. By the end of the war, he was under Allied occupation and transformed into

Republic of Hungary in 1946 and then 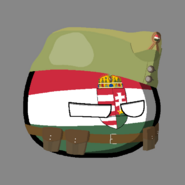 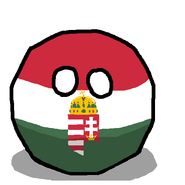 Retrieved from "https://polandball.fandom.com/wiki/Kingdom_of_Hungaryball_(1920-46)?oldid=1280776"
Community content is available under CC-BY-SA unless otherwise noted.