No, but can into heaven

Palestineball. It existed from 1099 AD to 1291 AD, mainly during the first 3 Crusades. until being destroyed by the kebab

Mamlukball.It occupied the "Holy Land" which is now apart of modern-day

Jordanball. Ayyubidball removed him from Holy Land, but he continued to survive until Mamluks’ conquest. 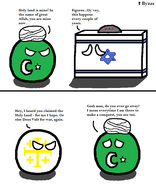 Retrieved from "https://polandball.fandom.com/wiki/Kingdom_of_Jerusalemball?oldid=1324053"
Community content is available under CC-BY-SA unless otherwise noted.