No, of course not

Italyball, centered in the city of

Naplesball. He lasted until 1816 when the country was now apart of File:Two Sicilies-icon.png Kingdom of the Two Siciliesball.

Franceball of 1806 until 1815. He can into the House of Anjou, House of Bourbon, and House of Habsburg. 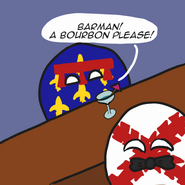 You know there are Bourbon and bourbon
~Prospero

Here represented by its ugliest flag

Retrieved from "https://polandball.fandom.com/wiki/Kingdom_of_Naplesball?oldid=1288994"
Community content is available under CC-BY-SA unless otherwise noted.