Crown of Kingdom of Polandball

Wants to unify with Lithuania, Wants take Modern Western Poland but they tried.

No, but it's generals can (kinda)

I wanna unify with Lithuania!
Crown of Kingdom Polishball was a historical countryball representing a stronk

Polandball under a series of governments of the Jagiellonian dynasty. Despite his flag not being rectangular shaped, this country is named -ball. The non-ball version is more like an Anschluss form.

In 1385, the growing threat of the Teutonic Orderball to both countryballs led to a closer alliance - the Polish-Lithuanian union, which marked the end of the long reigning Piast dynasty and the beginning of the Jagiellonian dynasty.

On 10 November 1444, Polandball lost king fighting Kebab in Varnaball, Which resulted in Polandball losing its king for many days. At this point, Polandball became a somewhat Elective Monarchy.

Kingdom of Polandball and

Grand Duchy of Lithuaniaball merged into a single nation, the Polish-Lithuanian Commenwealthball, marking the ending of the Jagiellonian dynasty. 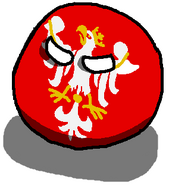 By u/miscakarza
Add a photo to this gallery

Retrieved from "https://polandball.fandom.com/wiki/Kingdom_of_Polandball?oldid=1344448"
Community content is available under CC-BY-SA unless otherwise noted.