Spanish Empireball (Most of the Time)

United Kingdom of the Netherlandsball

I WILL FIND YUO!

No, but can into discovery by sea navigation

The Kingdom of Portugalball, also known as the Portuguese Empireball (but never officially), was

Portugalball when monarchy from 1143 to 1910 when it changed into a Republic.

The Kingdom of Portugal was known as

County of Portugalball in his childhood and adolescence. The county became part of the

Kingdom of Leonball in 1097, and then

County of Portugalball established themselves as rulers of an independent (and adult) kingdom in the 12th century, thus the birth of the Kingdom of Portugalball.

During the 15th and 16th centuries, Kingdom of Portugalball developed navigation, allowing exploration for the establishment of a vast colonial empire. This made him the first global colonial power in Europe. He most notably started the "Age of Discovery".

Habsburg Spainball. After the Portuguese Restoration War of 1640–1668, the kingdom passed to the House of Braganza. From this time, the influence of Portugal declined, but it remained a major power due to its most valuable colony and son,

Brazilball. After the independence of

Brazilball, Portugal sought to establish itself in Africa, but was ultimately forced to yield to the

UKball's interests, leading to the collapse of the monarchy in the 5 October 1910 revolution and he became the 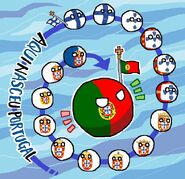 Polandball Wiki has a gallery of artwork, comics, gifs and videos of Kingdom of Portugalball.

Retrieved from "https://polandball.fandom.com/wiki/Kingdom_of_Portugalball?oldid=1303026"
Community content is available under CC-BY-SA unless otherwise noted.