Friendly (except to Austria-Hungary and the Central Powers), Patriotic.

in 1878, Serbiaball got independence as a result of Serbian-Ottoman War.

In 1882, Serbiaball established a Kingdom. It's first King was Milan Obrenovic.

In 1885, Serbo-Bulgarian War happened, because of Principality of Bulgariaball uniting with Eastern Rumeliaball. The war resulted in a favor of Bulgariaball.

In 1888, Radical Party led by Sava Grujić and Nikola Pašić came to power and a new constitution, based on the liberal Constitution of Belgiumball was introduced. The lost war and the Radical Party's total electoral victory were some of the reasons why King Milan I abdicated in 1889. His son Alexander I assumed the throne in 1893 and in 1894 dismissed the constitution.

On 29th May 1903, the May Coup happened and the King, along with his wife, was assassinated inside the Royal Palace in Belgradeball. This Assassination devastated the whole Europe. Other representatives of the Obrenović family were shot as well. This act resulted in the extinction of the House of Obrenović.

After King Alexander and his family members were assassinated, Peter I got back on the throne and brought Karadjordjevic dynasty along with him.

Most of European nations, especially Austria-Hungaryball,German Empireball and UKball, demanded that the assassinators(who were guards at the time) must be punished. Peter of course being the kind man he was, Didn't want to put the guards that helped him get to the throne to jail. So he just put them in retirement, which made most of the European nations pleased.

Austria-Hungaryball, being mad with the results of Pig War, Annexed Bosniaball in 1908. Whole Europe was suprised with decision(most of them in a negative way). This included Kingdom of Serbiaball, Ottoman Empireball, and Russian Empireball, growing a grudge against Austriaball.

In 1912 First Balkan War happened, which resulted in victory of Kingdom of Bulgariaball, Kingdom of Montenegroball, Kingdom of Greeceball and Serbiaball over Ottoman Empireball, and almost putting Turkeyball out of europe.

During the war everyone agreed how they'll split the land. But Austria-Hungaryball was jealous of success Montenegroball and Serbiaball had, And requested to Big Powers of Europe the creation of Principality of Albaniaball. Serbiaball was disappointed at it won't get parts of Albaniaball that it won after the war (including Tiranaball), So it took a bit of Macedoniaball that was agreed to Kingdom of Bulgariaball.

Second Balkan war resulted in Favor of Serbiaball, and Bulgariaball losing a ton of land.

After the First Balkan War, Serbo-Austrian Relations were the worst they ever were. Franz Ferdinand decided to visit Sarajevoball on 28th June 1914. 28th June is a very popular date in Serbiaball because Battle of Kosovo happened that day. Franz was already known for being heavily anti-Serbian, and him visiting Sarajevoball (which at the time had mostly Serbian population) was very disrespectful towards Serbs. So on that date Gavrilo Princip, Who was a member of a group calledYoung Bosnia', assassinated Franz Ferdinand and his wife thus creating the event that caused World War I.

Serbian Politicians, tried explaining they had nothing to do with The Sarajevo Assassination. But Austria-Hungaryball kept accusing Serbiaball with no evidence what so ever (because it wanted a cause to start a war against Serbiaball for a long time).

Austriaball concentrated 3/4 of it's Army in Serbiaball, but still resulting in losing because Serbiaball had much bigger knowledge in modern wars (Balkan wars) than Austriaball.

Serbiaball wasn't capable of defending itself from 3 sides and Marshal Putnik ordered a full retreat south and west through Montenegroball and into Albaniaball. The weather was terrible, the roads poor, and the army had to help the tens of thousands of civilians who retreated with them with almost no supplies or food left. Whole government and the King left along with army. Serbiaball was maybe conquered but it was still alive outside of it's own countryball. Later Serbian troops were transferred into Corfuball, which was soul capital of Serbiaball at the time.

Serbian troops would still fight in Greece during 1916-1918.

In 1918, whole Serbiaball was freed, and after that Yugoslav Austrian territories were conquered. 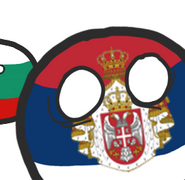 Retrieved from "https://polandball.fandom.com/wiki/Kingdom_of_Serbiaball?oldid=1293698"
Community content is available under CC-BY-SA unless otherwise noted.