Kingdom of Serbiaball was born as a

Byzantineball before becoming independent. After the many conquests that he succeeded in, he soon became the 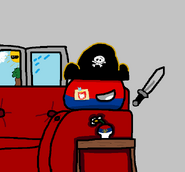 Retrieved from "https://polandball.fandom.com/wiki/Kingdom_of_Serbiaball_(medieval)?oldid=1293708"
Community content is available under CC-BY-SA unless otherwise noted.