The Kingdom of Sicily (Latin: Regnum Siciliae, Italian: Regno di Sicilia, Sicilian: Regnu di Sicilia, Catalan: Regne de Sicília, Spanish: Reino de Sicilia) was a state that existed in the south of the Italian peninsula and for a time Africa from its founding by Roger II in 1130 until 1816. It was a successor state of the County of Sicily, which had been founded in 1071 during the Norman conquest of the southern peninsula. The island was divided into three regions: Val di Mazara, Val Demone and Val di Noto; 'val' being the Arabic word meaning 'district'.

In 1282, a revolt against Angevin rule, known as the Sicilian Vespers, threw off Charles of Anjou's rule of the island of Sicily. The Angevins managed to maintain control in the mainland part of the kingdom, which became a separate entity also styled Kingdom of Sicily, although it is commonly referred to as the Kingdom of Naples, after its capital. The island became a separate kingdom under the Crown of Aragon. 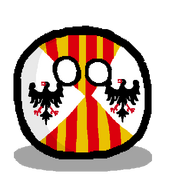 Add a photo to this gallery
Retrieved from "https://polandball.fandom.com/wiki/Kingdom_of_Sicilyball?oldid=1277351"
Community content is available under CC-BY-SA unless otherwise noted.