His communist personality takes control of him : he became

Kingdom of Yugoslaviaball, previously called the Kingdom of Serbs, Croats and Slovenesball, is an historical Slavic countryball composed by

Macedoniaball. Relatively big, it occupied most of Balkan clay with his neighbors

Greeceball. He was partially occupied by

Nazi Germanyball, both of whom supported and recognized

Croatian Rebels inside his clay.

The Kingdom of Yugoslaviaball was born when

State of Slovenes, Croats and Serbsball, as nobody wanted to recognise it as a real state (even though EVERYONE promised to do so) and the

Kingdom of Montenegroball. The country was known as the Kingdom of Serbs, Croats and Slovenesball, before it changed its name to Kingdom of Yugoslaviaball, by royal decree. He had several internal problems with his two biggest minorities, the

Banovina of Croatiaball and the Slovenian

Yugoslaviaball) he had multi personality dissorder, and wanted to get medical help to cure it, but before he could have succeeded, he was attacked by

While he was under

Independent State of Croatiaball and a small rump

Serbiaball while the rest of his clay was partitioned between the two axis powers.

resistance movements sought to establish an independent Yugoslaia free from Fascist occupation. The communist Yugoslav partisans managed to gain allied support, leading to the death of a Royal Yugoslavia and the establishment of 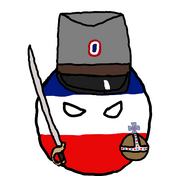