Kingdom of the Two Siciliesball

Italy before the Italian unification. He extended across southern Italy. Being ruled by the previous Bourbon Dynasty that ruled

Kingdom of Naplesball, the Two Siciliesball was reactionary and vehemently opposed the notion of a united Italy, especially one dominated by the likes of the seemingly "liberal"

However, the Two Siciliesball would finally be destroyed by Garibaldi's "Expedition of the Thousand" which would see the Kingdom annexed by the

Kingdom of Sardiniaball. Although the Two Siciliesball would still attempt to resist Savoyard rule for another 4-5 years (in the form of Brigands and Bourbon loyalists), they would eventually be quashed, with Southern Italy as a whole being the "last bastion of Royalism" within the

Forcibly, this peninsular had been unified earlier by Joachim Murat during Napoleonic Wars (under French Occupation) under the Napoleonic Kingdom of Naplesball. Once the Napoleonic Wars ended, the Bourbon Dynasty of the original Kingdom of Naplesball sought and achieved union with the Kingdom of Sicilyball ​​​​, thus seeing the creation of The Kingdom of the Two Siciliesball. The Bourbon king, Ferdinand I, was original open to reforms, but given the fact that it was the liberal elements of First French Empireball and those within his own country (Parthenopean Republicball) that deposed him, he turned the Kingdom into that of a reactionary based absolute monarchy, adamant in preventing most liberal reforms.

The Kingdom of Two Siciliesball was relatively independent from the foreign influences of French Second Republicball and Austrian Empireball, a rarety within the Italian peninsular during this time. Despite 3 revolts originating from the island of Sicilyball, the Kingdom managed to live until 1860. This was when he was killed by the

Kingdom of Sardiniaball in an event that would be known as "The Expedition of the Thousand". Despite support from Spanish_Empireball and Papal Statesball, The Kingdom was annexed by the newly proclaimed 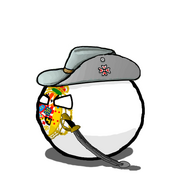 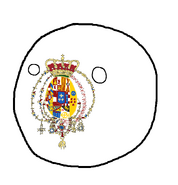 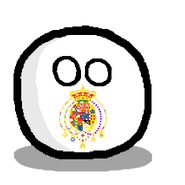 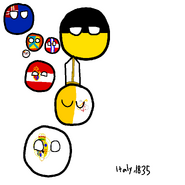 Retrieved from "https://polandball.fandom.com/wiki/Kingdom_of_the_Two_Siciliesball?oldid=1311694"
Community content is available under CC-BY-SA unless otherwise noted.