Kyrgyzstanball was born as a

Soviet Unionball. He was established in 1936 under

Communism and was integrated as a new Soviet Republic. In the 1930s, religions in the republic, mainly

Islam, was suppressed along with the pre-Soviet culture.

Soviet Unionball and started the Eastern Front of World War II and Sovietball gave his son guns to fight Nazi Germanyball and the Axis Powers. On December 15, 1990, The Kirghiz SSRball was renamed to the Socialist Republic of Kirghiziaball after declaring it's state's sovereignty. On 31 August 1991, it transformed into independent Kyrgyzstanball. 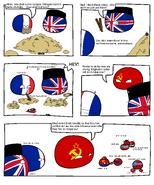 Retrieved from "https://polandball.fandom.com/wiki/Kirghiz_SSRball?oldid=1299060"
Community content is available under CC-BY-SA unless otherwise noted.