People can't pronounce my name right! Is of Kiri-BAUS not Kiri-BATTEE!
being drowned

Crabs, Rice, Fish
Kiribatiball (pronounced "Kiribasball"), officially the Republic of Kiribatiball, is a countryball in Oceania. He currently has great relations with his brother

Tuvaluball and is famous for both occupying all 4 of the world's hemispheres, and receiving the new year first. He is otherwise incredibly irrelevant. And when he is mentioned, they can't even pronounce his name right.

Laosball can relate. He is also into sinking;

Micronesiaball, and was first adopted by

Spanish Empireball in the 1500s as part of the

Spanish East Indiesball. However, he became

Empire of Japanball kidnapped and raped him in 1941, but he was rescued by

USAball in 1944, and then given independence by his third adoptive father in a hundred years, in 1979. He is yet to become of relevance.

On 20 September 2019, Kiribatiball broke ties with Taiwanball and recognized Chinaball. 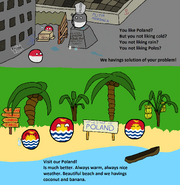 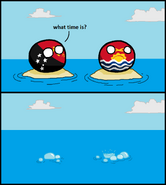 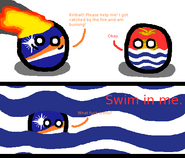 Retrieved from "https://polandball.fandom.com/wiki/Kiribatiball?oldid=1256514"
Community content is available under CC-BY-SA unless otherwise noted.