New York Cityball (he used to have twin towers)

Malaysiaball, he used to be the state capital of

Selangorball, later he became a Federal Territory in 1974. The Petronas towers are located in his clay, and he protects them a lot so it won't become another 9/11. He also has a future skyscraper under construction which will be taller than the Petronas Towers, Kl118. In Malay language, Kuala means city, whereas Lumpur means mud or dirt. Malaysiaball gave Kuala Lumpurball such a name because of his abundance in tin and other mineral resources.

He can into diversity so he can into many languages.

Kuala Lumpurball was founded in 1859 by 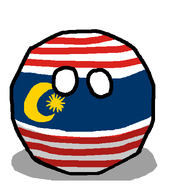 Retrieved from "https://polandball.fandom.com/wiki/Kuala_Lumpurball?oldid=1295051"
Community content is available under CC-BY-SA unless otherwise noted.