Belarusball claims to be him together.

WILL OF RISE AGAIN! OF BE DANGEROUSLY STRONK!
The Kyivan Rusball, or the Kievan Rusball, was a mighty countryball in Eastern Europe. He sprouts EAST SLAVIC POWER! He was a somewhat loose confederation. He was destroyed by the

Ukraineball in his childhood and teenage years.

He was founded by Vikings from Scandinavia and the Slavs that lived in the area. He used to follow Slavic Paganism but converted to Orthodox Christianity in 988 AD and became friends with Byzantineball. In 1054 Yarislav the Wise died and the

Kyivan Rus began to weaken. In 1240 the Mongols from the eastern steppes of Mongolia invaded and killed the

Nowadays, all his clay belongs to

Kyivan Rusball because Kyivball and several other old Russian cities are on his clay. Ukraineball also says that Russiaball rewrote history and is the successor of Golden Hordeball because a lot of Russian lands are on Horde's old clay. Russiaball says that Ukraineball is not a real nation since the Rus' moving in East is historical was proof that Golden Hordeball's clay was conquered/peacefully taken by him. When Ukraineball was part of Russiaball his name was "Little Russiaball" and Russiaball called himself "Great Russiaball," because it is a traditional way to call old and new political centers. Also, Russiaball has many other old Russian cities, for example, Veliky Novgorodball, that was the capital city before Kyivball and Old Ladogababall, that too, was a capital before him and where Rus was founded as a state.

Belarusball wants peace and according to him, they all together are Rus. Let's hug! 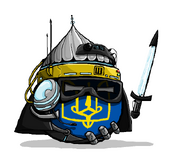 Retrieved from "https://polandball.fandom.com/wiki/Kyivan_Rusball?oldid=1258849"
Community content is available under CC-BY-SA unless otherwise noted.