Yet Another Flag Stealer

How Many Flag Stealer are there

YES THIS IS A FRICKIN FLAG STEALER

Not picky.
Lesothoball is a province of

South Africaball countryball in the southern of Africa. It is a mountainous region totally surrounded by

South Africaball. He is a descendant of the Bantuball. Due to poverty and his leader literally being psychotic, many Basotho want

South Africaball to entirely annex it.

In the 18th Century,

Lesothoball started out as a refugee from the fighting in

The Sothoballs decided to let a guy called Moshoeshoe lead them, and they built mountaintop fortresses in

Lesothoball. They threw large rocks at anyone trying to bother them.

UKball, who likes to interfere in such matters, declared

Lesothoball felt secure and sent out raiding parties, stealing the Boerball's sheep and horses and the Zuluballs cattle. This hobby is still practiced today.

Lesothoball has a lot of water and made an agreement with South Africaball to use it in its factories in Gautengball. Every time

Lesothoball changes government, it changes its mind on the tariffs for the water and upsets

Lesothoball may be doing this to piss off his neighbor.

Lesothoball also has a lot of diamonds in his mountains, as they are volcanic in nature.

South Africaball in its mines.

Chinaball, and there are a few factories now run by

Chinaball on the premises.

Lesothoball is still friendly with his stepfather,

Lesothoball is a member of SADC, but usually doesn’t attend any meetings as his Basotho pony takes too long to get him there. 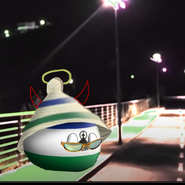 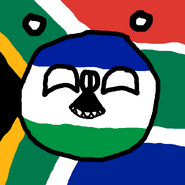 Add a photo to this gallery
Retrieved from "https://polandball.fandom.com/wiki/Lesothoball?oldid=1263793"
Community content is available under CC-BY-SA unless otherwise noted.