Fellow Kebab who is a Dimsum puppet (Moslty)

My old Friend! Plox avenge me!

My iron brother who received the same tragic fate as I did.

idk why (most of the time)

Nordic version of me??

HE IS FRIENDS WITH THE BURGERITO

YOU ARE OF FAKE KOREA!!!

Acussed me of terrorism

traitor that helped kill me

Other People That Hate Gadaffi

Donkeys of the gulf

This "Pan-African" traitor who now a puppet of the west

Siad Barre should have murdered you by now

Islamist Extremists, illegal immigrants, 1986 Bombings, Poligamy, Arab Spring, Paige from DHMIS (she said Green Is Not A Creative Color), Saudi Arabiaball and other donkeys of the gulf

Great Socialist People's Libyan Arab Jamahiriyaball, or simply The Hulk, Jamahiriya Libyaball until February 2011, was a (kind of) historical kebab countryball. This was Libya ruled under Colonel Gaddafi. He was the richest country in Africa and also the most developed until 2011 when he was killed by most

However, in the 2nd Libyan Civil War (2014–present), there have been

Gaddafi loyalists led by Saif al-Islam Gaddafi, one of the sons of Muammar Gaddafi. He is Special bc he is the only countryball to have one color in it, G R E E N.

Most western countries in the world, but especially:

Gaddafiball is, without a doubt the easiest countryball to draw. A small child could draw him: 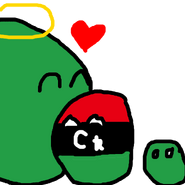 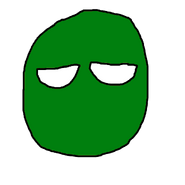 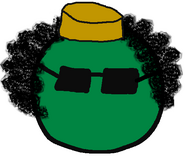