He was once called La Ciudad de los Reyesball (The City of the Kingsball).

He was a normal agricultural spot during the Inca era, however during the conquest of the Inca Empireball, the Spanish Crown confirmed the creation of

During the 1810s, there were big revolts on cities like

Argentinaball proclaimed the independence of

Because of the War of the Pacific, Limaball was occupied by

During the 1980s, the city was controlled by a terrorist communist organization called Shining Pathball, however they left on the late 90s after Abimael Guzman was captured.

Nowadays, he accepts Venezuelan inmigrants to live on his mostly urbanized clay during the 2010s.

Since his foundation in 1535, Limaball has goten along with cities around the world, mainly in his country. However, he still has enemies in Latin America. 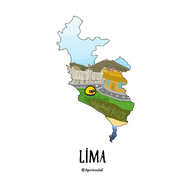 Map of Limaball
Add a photo to this gallery

Retrieved from "https://polandball.fandom.com/wiki/Limaball?oldid=1274024"
Community content is available under CC-BY-SA unless otherwise noted.