Campaniaball and the south of Italy, or essentialy anything under the Po river, people that think the symbol on the flag is a fidget spinner, being doomed due to coronavirus

Italyball. It is considered the most technologically advanced regionball in Italy and is the only Italian region with over 10 million inhabitants, making it the most populous; it’s also the place with most UNESCO heritage sites in Italy, being 11. 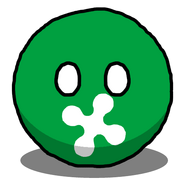 Retrieved from "https://polandball.fandom.com/wiki/Lombardyball?oldid=1270714"
Community content is available under CC-BY-SA unless otherwise noted.