: Army ya Bwana ya Upinzanimpira

Hiding one of our allies
Ally in Hiding
Friendly Commies

Non-Christian Governments, Disbelievers, Anything not Christian

In hiding, for now

Democratic Republic of Congoball, and

Central African Republicball. They wish to install a Christian Dictatorship across them all. They are strongly opposed to

United Nationsball because they are helping the opposing governments to them.

LRAball sprouted from 2 of their (former) allies, Holy Spirit Movementball and Uganda People's Democratic Armyball. The latter was destroyed by

LRAball started their insurgency in 1987. Everything was going alright, and even in the 1990s

LRAball troops to continue the fight. They started to genocide villages after this, and eventually

USAball got involved in the fight against them. After years of genocides and losses, KONY 2012 came out, making

LRAball popular across the world, even giving them support in some cases. After some more genocides and losses,

LRAball has been thinned down to 100 troops hiding either in

LRAball has been proven to force children into their army during raids on villages at night called Midnight Raids. It ended up provoking children to retreat into big cities at night to avoid these brutal raids, as

LRAball would force the child to kill and eat their parents. 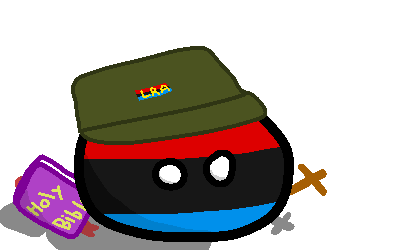 Retrieved from "https://polandball.fandom.com/wiki/Lord%27s_Resistance_Armyball?oldid=1072211"
Community content is available under CC-BY-SA unless otherwise noted.