Kind and appreciative, but can immediately turn ravage if offended Especially if you offend the holy Lemur

I am not a Titan territory!!!!

Closing ports during an epidemic, being

Those who trespass while ports are closed,

Lemur blood and Lemur meat, Malagasy vanilla ice cream romanzava, Whatever Alex the lion was eating back in the back of the studio

HOW MANY TIMES DO I HAVE TO TELL YOU, I AM NOT THE MOVIE! (2005, 2008, 2012)
Madagascarball is a Big and CHUNKY countryball in the Indian Ocean and off the coast of Africa, it occupies the 4th largest islandball in the world (after

Greenlandball, New Guinea, and Borneo) and is the largest completely independent island nation. It also has a movie dedicated to the country. Madagascar. I LIKE TO MOVE IT MOVE IT!! I LIKE TO GROOVE IT GROOVE IT!!! The movie gains millions of views and became very popular (but has never screened in the based country) which leads to more attractions among lemurs on this island. Lemurs are only found in Madagascar because the rest of the African Monkeys were aggressive and kicked them out from Africa. Since Madagascarball seems to be a kind clay, the lemurs decided to stay in Madagascarballl.  Now to this day, Madagascar is famous for their beautiful lemurs now only founded in his clay. He also seemed to really hate the fossa, and their species seem to decrease dramatically each year. Moreover to Madagascar's success of being a celebrity on movies, unfortunately, it is the 8th poorest place in the world.. and the most corrupted island in the world (besides Comoros) according to multiple sources. Due to hunger strikes, poverty, corrupt governments, and the result of the USSR unfortunately, the people are poor and barely can provide for themselves, despite Madagascar's fame.

Austronesian sailors from Malay Archipelago, before

8ball came in later and

Merina Kingdomball established in 16th century. Was of happy 'til

Franceball colonized him. Thankfully, he gained his full independence by June 6, 1960, before he started using communism to improve his economy. Unfortunately, it did not and lead to several consequences regarding his economical problems in the result of

Sovietball death. But he was lucky that he had what is now Comorosball, Mayotteball, and the French Southern and Antarctic Landsball in his possession 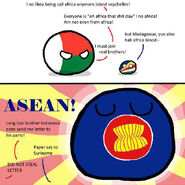 Retrieved from "https://polandball.fandom.com/wiki/Madagascarball?oldid=1263375"
Community content is available under CC-BY-SA unless otherwise noted.