Yeah! (Chile pays for me)

Study in Santiago
Magallanesball is the XII region of Chileball.

One of the last clay reclaimed for Chileball, Magallanesball is distinguished for be different for his brother (especially to Santiagoball) due by installed in the Zona Austral. Originated for the mix to Chiloé people and Croatiaball, unique in his culture (a little weird sometimes) and liked for... another stuff (Choripan with banana-milk).

He have some uniques words in his dialect, like:

After years of... normality, the región wants independence of Chileball because is a forgotten región compared the others regiones. Is called him self "La republica independiente de Magallanes" (Even if it is not) 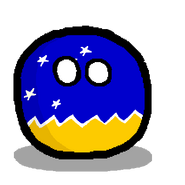 Retrieved from "https://polandball.fandom.com/wiki/Magallanesball?oldid=1218954"
Community content is available under CC-BY-SA unless otherwise noted.