Too lone to it

can into space? this is impossible!

REMOVE KEBAB! MAMLUKS STRONG!
Mamlukball was a sultanate encompassing Egypt, the Syria, and Hejaz. He lasted from the overthrow of Ayyubidball until Ottomanball's conquest of Egypt in 1517. He was made up of balls of Cuman-Kipchaks, oghuz slave(Bahri dynasty) and Circassian, Georgian slave(Burji dynasty) origin.He was the greatest kebab defender,only second to

It's more an artist's choice since its unusual flag shapes makes it looks like a monster. Reddit allows only the -rawr version while everywhere else you can use both.

Mamlukball first appeared when he revolted against Ayyubidball and he won against a small army owned by Mongol Empireball. After that, he conquered some crusader states in the levant. Then, Ottoman Empireball rose and conquered lots of clay in Europe. Even though they were the same religion, Ottoman Empireball declared war on them in 1485 and 1516 with the justification of Mamlukball being a heretic. They collapsed in 1517 after Cairo was captured and were completely annexed by Ottoman Empireball. 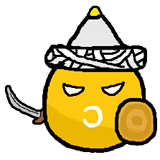 Retrieved from "https://polandball.fandom.com/wiki/Mamlukball?oldid=1270867"
Community content is available under CC-BY-SA unless otherwise noted.