Japanball to take charge of the newly anschlussed Manchuria, creating Manchukuoball in the process.

Naziball in Berlin, Sovietball redeployed some of his troops to the Far East and quietly began to ready themselves for a war. The wait did not take long, after the USAball dropped some of his newly created freedom devices on Japanball's tentacles clay, Sovietball declared war on Japanese Empireball and stormed onto the clay of Manchukuoball (who was a puppet under the direct control of dear friend of Japanese Empireball). After 11 days of attempting to lead (if you can even call it leading) his inexperienced and poorly equipped military in what quickly turned into a VERY one sided battle against overwhelming numbers of highly experienced and better equipped Soviet forces. During the fighting, Manchukuoball was killed in Harbin by

After the Manchukuoball died, his clay was taken by Sovietball, who then proceeded to hand the clay to 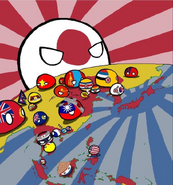 By u/EmeraldOnFire101
Add a photo to this gallery

Retrieved from "https://polandball.fandom.com/wiki/Manchukuoball?oldid=1316981"
Community content is available under CC-BY-SA unless otherwise noted.