Pavalova (are you angry,

Trying to be relevant again

Maoriball(known as Mario) is the first Polynesian people that lived in Aotearoa. Nowadays, he's only a secessionist entity.. not many people speak the language fluently (<14%), which kind of makes Maoriball sad. But at least he accepts Maori is the second national language of New Zealandball and everyone knows the basics (like Kia Ora).

Maoriball is talented at Hunting, Fishing, Rugby and guitar music, from Maori folk to reggae to hard rock and metal riffing mostly. But also getting into trouble through his old warrior habits.

Maoriball evolved from 7ball and always hated UKball till he was succumbed to an agreement in the Treaty of Waitangi in 1834, becoming United Tribes of New Zealandball.

In around the 20th century, New Zealandball's British-style culture became so dominant over Maoriball's culture that Maoriball almost became completely influenced, resulting in a short identity crisis of whether he should leave his indigenous ways behind and become like Britain, but no. He eventually decided that he would not leave his tribal roots and has recovered most of his former cultural identity, although was never able to fully recover his former ways. Which can be a good thing considering he ate 4

Dutch crewmen and taunted with the severed heads and remains on the beach... And fighting each other.

There are far more of them in the North Island than the South Island of New Zealand and Northlandball has the highest concentration of Maoris in New Zealand. 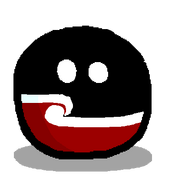 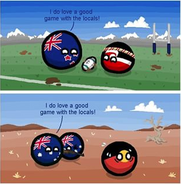 Retrieved from "https://polandball.fandom.com/wiki/Maoriball?oldid=1290004"
Community content is available under CC-BY-SA unless otherwise noted.