No, but can into World Cup
Mapucheball are a native people of Chileball and Argentinaball.

The Mapuche tribes located between the Biobío and Toltén rivers (now

Chileball) managed to successfully resist the Spanish conquistadors in the so-called Arauco War, a series of battles that lasted for 300 years, with long periods of truce.

Spainball recognized the autonomy of these territories in 1641, by means of the Treaty of Quilín. After independence of

Argentinaball, their territories was invaded by the armies of these countrybals and the Mapuche population being confined in to "reductions" in Chileball and indigenous reserves in Argentinaball.

Because of this process of territorial deprivation, more than half of the Mapuche indigenous population now lives in urban areas, many of them maintaining links with their communities of origin.

In general, the Mapuche movement is fighting for the recovery of its ancestral territory, for constitutional changes in favor of indigenous rights and recognition by the States of their cultural specificities.

3balls. Mapucheball is a born leader and warrior. He does not get along with the

Spanishball Empire because the Spaniards invaded his clay. He also does not get along with the government of

Argentinaball because they do not want to return their original lands as well as with Incaball, since Mapucheball prevented his plans for southern territorial expansion.

In his free time he likes to burn trucks. 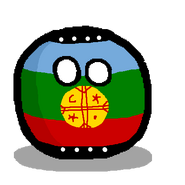 Retrieved from "https://polandball.fandom.com/wiki/Mapucheball?oldid=1251616"
Community content is available under CC-BY-SA unless otherwise noted.