Everybody, except ones at below my best friends

Pirateballs
You do the same thing as the Dutch shit!

DODO´S ARE BETTER THAN LEMURS

Saudi Arabiaball
You do the same thing as the ISIS shit!

Dodo Dodo [not referring to that one commercial from Indonesiaball]
Mauritiusball have a flag that look like LGBTQ+ flag is a countryball off the east coast of Africa. He is to the east of

Lebanonball. He can speak both French and English, but he speaks more Creole and Bhojpuri. He is also the only African country with a Hindu religious majority, due to the large migration of

Indians to their territory. He is the most developed countryball in Africa and he also has the most stable government.

Mauritiusball was born as an

Netherlandsball discovered him and adopted him HE ALSO INTO KILL ALL MINE DODOS AND I WILL OF PUNISH HIM VERY BADLY I HOPE HE INTO SINK!!!, However, in 1710,

made everyone slaves. Despite this sad event in Mauritiusball's history, his language is based off

French. When the Napoleon wars began,

Mauritius became nothing more than a port, which

Indians began to arrive in

Mauritius to work and soon they became an important group on the island.

Mauritiusball's willingness to fight for

Mauritiusball was not affected much by the consequences. In World War II, however,

Mauritiusball was affected badly. His clay was in a state of civil unrest, but he soon recovered. Due to being unable to hold onto his colonies for much longer,

Mauritiusball was recognized as a republic in the Commonwealth, and since then has managed to become one the most prosperous countryballs in Africa. 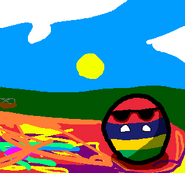 Sand Dunes
Add a photo to this gallery

Retrieved from "https://polandball.fandom.com/wiki/Mauritiusball?oldid=1262542"
Community content is available under CC-BY-SA unless otherwise noted.