No (Eventually, Kars stopped thinking)
Mayaball was a native tribeball that represents the wider Mayan peoples in the world of Polandball. Much like the rest of Mesoamerica, they were renowned for their pyramids. Contrary to popular belief, however they were not often into sacrifices, that was more of an

Aztec thing. The Mayans were subjugated by

Spainball, though it is said/believed that Mayan civilsation was already in decline long before Spainball came, possibly because of drought. His descendants live on within

Guatemalaball, and are also prominent in the Yucatan peninsula and its various states. They were subject to genocide in 1980's, but survive still.

Its calendar ended on December 21, 2012, which was widely misinterpreted as the end of the world.

There are two mode for drawing Mayaball. After drawing, you can add spear, Mayan shield or feather headdress.

First (and most difficult) method

It's based on most official flag: 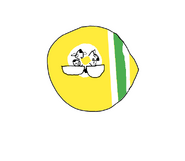 Add a photo to this gallery
Retrieved from "https://polandball.fandom.com/wiki/Mayaball?oldid=1303154"
Community content is available under CC-BY-SA unless otherwise noted.