Franceball and his oversea territories

Malagasy imperialism, be mistaken to mayonnaise
Mayonnaiseball Mayotteball, also known as Maoreball, is a French overseas region near

Madagascarball. As an integral region of

Franceball, he can be represented in the French National Assembly, the French Senate and in the French Economic and Social Council, and can use the Euro as currency. It is currently disputed by

Comorosball. He is the only French region with a majority kebab population.

Franceball doesn't give a shit about him. 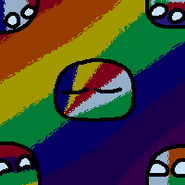