[A Things Lot Will Come]
What

Yes, by his Space Agency. also can into killing dinosaurs with 6 mile wide space rock hehehe

Mexicoball, officially the United Mexican Tacos Statesball is Sr Pelo a countryball with identity conflicts; he lives in North America with

Canadaball but he does not share their language. The country is divided into 31 states, along with a special territory being his capital

Mexico maintains membership in the

UNball like almost every other country in the world, and used to be also a major NATO ally, but not anymore. Mexicoball is also member of the G20 (or Group of Twenty), a club formed by the countryballs that have the 19 largest economies plus the

Masonic Burgerball mass media shows. It is true that Mexicoball isn’t as developed as the USAball, but Mexicoball would be considered a solid middle-class countryball. His economy has seen a large amount of growth due to his large trades with

USAball, and he is trying to reduce poverty in the country to provide more opportunities to its citizens such as jobs, education, and the installation of universal healthcare. Though he does struggle with problems like crime, drug wars, and water pollution, things are beginning looking up though, and he'll be completely developed soon! He is a relatively weak countryball right now but by 2050 it is estimated that he will be a force to be reckon with.

He can into 2026 World Cup with USAball and Canadaball. It´s the third time thatt he host the tournament, being the country who most hosted the World Cup. The cities hosting have not yet been determined. He can also into the crater of the dino-killing asteroid (Te callas Ukraine!)

His birthday is on September 16, and his astrological sign is Virgo.

65 million years ago, Mexico was struck by the asteroid that wiped out the dinosaurs, the Earth was barley alive and caused mass extinctions.

For thousands of years, the clay of that is now Mexico was home to ancients

New Spainball, and for the next 300 years, he remained under the custody of

Spainball. But when his mother was defeated by

Franceball in Europe, he and his brothers sought to become independent. To do so, they fought their mother,

After 11 years of fighting, Mexico became independent in 1821, but didn't really have any idea how to govern itself. The

First Mexican Empireball was originally a unitary countryball, but after the fall of the monarchy in 1823, the Provinceballs of the Empire became Federated Stateballs of a Federal Republic. But in 1835 Mexico became a Unitary or Centralist Republic, and because of this political instability set in all over his clay. Mexicoball fought a short war with

Franceball over a pastry restaurant, while the federalism caused several states to begin revolting. One of the states that hated the Centralist Republic was...

USAball in 1845. In 1846, Mexicoball returned to be a Federal Republic and tried to take back

USAball resisted, triggering a war that ended in

USAball robbing gaining custody of Mexicoball's northern sons, which are now the American states of

Franceball tried to get control of Mexicoball, turning him again in

Second Mexican Empireball, but failed miserably, and gave up in 1868 threatened by USAball just after winning over

Starting in 1876, Mexico was ruled by Porfirio Diaz, and there was relative peace until 1910 when the Mexican Revolution caused 10 years of major fighting, and then he had some conflicts with

Reichtangle invited him to declare war on

USAball in World War I in return for all of his sons, including

New Mexicoball. Mexicoball sensibly declined. In 1917 a new constitution was implemented and starting in 1929, Mexico was ruled by the P.R.I. party for 70 years.

Philippinesball. However, it remained mostly neutral during the Cold War while hosting the

Nowadays Mexicoball is now known for being a "taco illegal alien" who has drug violence and corruption problems on his clay. But Mexicoball resolves with his new presidential strategy since 2018.

And 1 extraordinary entity and capital: 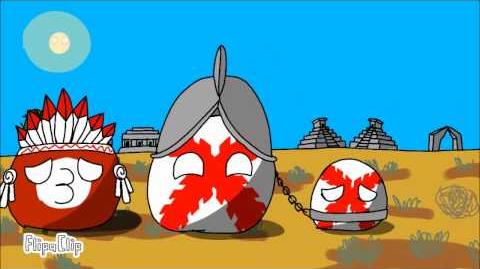