Hard Working, whether the work is legal or not.

Judaism (only in and around Detroit)

GIVE US SOUTH BEND

Legalized weed and is of getting high.

Split into 2 penninsulas of clay, has yearly cherry festival in Traverse Cityball, borders most of the greats lakes.

Pure Michigancube is a Good Old statecube in the midwest of

Unlike the state itself, its cities within his clay are ball shaped.

Michigancube is known for his great lakes, natural beauty, sandy beaches on the west coast of the state and mountains in the upper peninsula. He is one of two states of USAball  that are not ball-shaped (the other being OhioRawr). Also, it is the only state to be separated into two sections with the upper one represented as Yooperball.

Michigancube had the inventor of cereal and Henry Ford in their history. His capital is Lansing and his largest cities are Detroitball and Grand Rapidsball. He has a close relationship with Canadaball.

Michigancube has an increasingly good reputation, Detroitball is currently the comeback city while Flintball just got federal grants to fix it's pipe infrastructure. Flintball will be entirely lead free soon. Meanwhile, every other USAball city will still have lead pipes.

Michigancube is known as "The Great Lake State", because it's surrounded by four Great Lakes, Michigan, Huron, Erie, and Superior. Michigan and Huron are really one lake, but Michigan says it's two so he sounds more important.

Michigancube is one of the few states with a bottle refund policy - you get 10 cents for each returned bottle.

Israelcube. If someone asks why Michigan is a cube, the proper thing to do is respond with, in all caps: "CIRCUMSPICE".

In 2018, Michigancube voted to legalize weed. Even if it could become an invasive species.

Yooperball which became part of

New Franceball. Then after the Seven Years' War

UKball took over that land and it became part of British North America.

UKball, they created the Northwest Territory. That became the Michigan territory in the early 1800s but then...

Ohiorawr were at war over the Toledo strip, which was valuable due to it's connection to the Great Black Swamp. Both Ohiorawr and Michigancube pussied out and fired into the air in their one confrontation, leaving no casualties and only one Michigander wounded. Ohiorawr gained the Toledo strip, but Michigan was given the Upper Peninsula to calm the butthurt, which proved more useful later in history due to its surplus of copper, iron, and wood. However, Michigancube and Ohiorawr are still pissed at each other, the bitterness showing in the intense rivalry between the football teams of University of Michigancube (Wolverines) and Ohiorawr State University (Buckeyes).

During the American Civil War, when USAball called for a new regime, Michigancube went forward and gladly volunteered. He was given the name the 24th Michigan. He was put into the Iron Brigade with Wisconsinball and Indanaball. Michigancube´s biggest battle was the Battle of Gettysburg, where he was the 1st Brigade, 1st Divison, I Corps. When, on July 1, 1863, he was the first to defend Gettysburg from the

CSAball. He fought hard and with might and would fall. Due to Michigancube´s fighting, he gave the rest of the army time to prepare for battle and get a needed victory in the war. Michigancube´s motto was ¨No ball may take those colors and live!¨ and that´s what he did. Michigancube was recognized for all he had done throughout the war.

Ford Motor Company is made in 1903 with a fixed budget of $28,000. They would go through many models of cars from 1903 to 1908 before reveling the Model T, the first mass produced car. In 1913, the first moving assembly line was indroducted. The Model T would well over 15 million cars because of it extremely cheap price and always decreasing prices throughout the years of productions.

During World War 1, in 1918 Michigancube was called to fight in the war with

Wisconsinball for the allies. Their name given in the war was the 32nd Infantry Division. They were the first Americans in WW1 to fight against

German Empireball. They were put in the Battle of Marne and Oise and the Meuse Argonne Offensive. Every counterattack that

Franceball saw how the 32nd cleared the Germans he called them Les Terribles (The Terrible) when bring them to meet at North Soisson. On their uniform was a red arrow because of how they penetrated Germanyball's defensive lines, giving them their other nickname The Red Arrows. After the war ended they would stay till April 1919 as an Army of Occupation in Germany. Both Michigancube and Wisconsinball were given the Croix De Guerre by

Franceball in honor of what they did.

Nazi Germanyball but the attack on

Empire of Japanball . The 32nd was shipped to

San Franciscoball to be shipped out for training in Australia. The 32nd was the first US divison to fight against Japan with a ground assult in the assault against Port Moresby(New Guinea). They would fight all with

Australiaball , in New Guniea, to prevent

Empire of Japanball from advancing in the South Western Pacific, with much sucess. Near the end of the war, the 32nd would fight in the Philippines along side

Empire of Japanball and had him surrender. Then on August 15, 1945

USAball ending the war in the Pacific. The 32nd was in total given 11 Metal of Honors. This would be the last major war Michigancube would fight in.

8ball  had enough of the police burtality from

Detroitball's police force and would riot for 5 days straight. This would lead to the Michigancube and

Detroitball to breakup the fight. This riot would leave 43 dead and half the city burned to the ground.

Detroitball would be in big hole of debt and a ruined repuations for everyone, even his own state for a bit. This is the most costly riot in America.

There are many Arabs in his turf, making him a Juden-Kebab 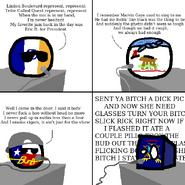 Retrieved from "https://polandball.fandom.com/wiki/Michigancube?oldid=1334203"
Community content is available under CC-BY-SA unless otherwise noted.