Rising sea levels AND LOSING IN FOOTBALL (SOCCER) TO

Vanuatuball for 46-0, being called irrelevant.

Alive, changed the date of

He is an irrelevant countryball whose main source of income is fishing, and not much else. Micronesiaball is the child of

Spainball, but was then adopted by

Japanese Empireball. It was the site of a major battle in WWII, where a bunch of Americans dropped bombs all over a Japanese base on one of poor little Micronesiaball's islands. Micronesia then finally settled down with

USAball as its adopted father. USAball's relations with Micronesiaball, though, are only lukewarm. The biggest giver of aid is actually

Chinaball, who cares very much for Micronesiaball.

Chuukball, is gonna have a independence referendum on... one day for sure. It was first planned on the 3rd of March 2015, but they changed it to the 5th of March 2019, then to March 2020, which will most recently occur in 2022. They will most likely just change the date again.

Micronesiaball is perhaps one of the blandest countries in the world today, although an astronaut born during his Pacific Trust Territory days went to space in the 1990s; after 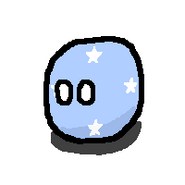 Without the stamp of irrelevance

It's Always Sunny in Micronesia 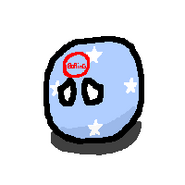 With stamp of irrelevance

Retrieved from "https://polandball.fandom.com/wiki/Micronesiaball?oldid=1261238"
Community content is available under CC-BY-SA unless otherwise noted.