Nostalgic (for the worse), Racist, Redneck

The tears of democrats from 2016

The government has voted to replace the flag! NOOOOOO!!! I'm sorry,

pa! I failed you.

THEY ARE TAKIN MUH SLAVES!

Mississippiball is the biggest redneck ever a

USAball state. He used to be the only US state to have no official state flag, due to the former flag being fairly similar to a hypothetical

USAball. During Secession War, he went to

People wanted to change his flag due to his, well,

obvious resemblance making it controversial. Yet nothing has happened until now when a bill was made to replace his flag, making it the last US state to remove their confederate symbol.. DON’T YOU DARE DISRESPECT THE CONFEDERATE BATTLE FLAG

He has came up with a new flag as a replacement, one that doesn't come with a Confederate symbol. Even with this big change, citizens are prohibited to fly the former Mississippi flag on their own property. 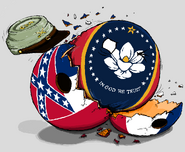 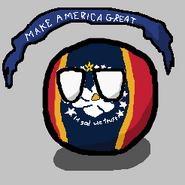 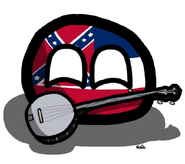 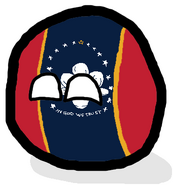 Retrieved from "https://polandball.fandom.com/wiki/Mississippiball?oldid=1299552"
Community content is available under CC-BY-SA unless otherwise noted.