Protestant, but also have a huge

Chinaball I'm very proud of myuself cus I was the first state to sue him for Covid!

Show me Show me

What all Americans eat

I am in Missouriball is a state of

Missouriball was officially born as an

3ball, colonized by France and Spain, then was adopted by

USAball. He officially became a state in 1821. In the 1830s, citizens got into a feud with evacuees

immigrants.  In 1839 he lost a bloodless conflict with

Iowaball had to give up his upper right corner.  During the Civil War, he was one of the few slave states to not join the

CSAball.  However, he also sent a lot of people to fight for

CSAball's people use his clay to launch raids.

Missouriball was the launching point for many expeditions to settle more western clay.  People freshly arrived from

German Confederationball would gather in

St. Louisball to buy wagons, oxen, sacks of flour, and grandfather clocks before setting out to ford rivers and die of dysentery.  Eventually, he decided to commemorate the valor of these peoples dying to settle new clay by building a giant metal halo; but because Missouriball couldn't do anything right it came out looking all wonky and stretched out. 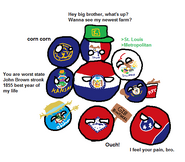 Retrieved from "https://polandball.fandom.com/wiki/Missouriball?oldid=1295101"
Community content is available under CC-BY-SA unless otherwise noted.