Every slave ally of mine.

Anyone who resists me.

Wow, I’m very impressed GIVE ME YOUR AUTOGRAPH

Right after I into World Domination. (no)

Mauritaniaball is a historical countryball that conquered most of East Asia, Central Asia, and a part of East Europe before dying. He was the second-largest empire in history. He was responsible for the murder of

Kyivan Rusball, which is regarded as the sole successful attempt at invading and fully puppeting

Khamag Mongolball state was established by Genghis Khan. It conquered so many places that it had way too many successors.

When he succeeded, he turned to Russia and brutally defeated a broken apart

Kyivan Rusball, sacking and destroying many cities. Mongols also spread the Black Death to Europe via its conquests, which wound up killing up to 50% of its population!

Kyivan Rusball was defeated, he headed to eastern Europe to prepare for battles with

Kingdom of Hungaryball. The Mongols were on the way to full success. However, the Grand Khan Ögedei had died, and a new

Khagan had to be elected by the military leaders in the Kurultai back in Asia. Thus the conquest of Europe came to an end.

When his next emperor rose, he advanced to Khwarizm empire and defeated him. Then he headed to Baghdad and forced

Abbasidball to surrender, but Abbasid wouldn't surrender. So he ravaged Baghdad and killed all of Abbasid's people including the Caliph. When Baghdad was destroyed, he headed to Egypt. He made allies with

Georgiaball to try and conquer middle east. The

Mamlukball prepared for battle against him. Then he and the Mamluks met in Ain Jalut and started the battle. His General was killed and he retreat from the Middle East.

He first attacked Korea and succeeded, after Korea was killed and fully conquered. He then sailed to and the Mongol leader Kublai Khan threatened Japan to become a vassal state and send a tribute or threaten Japanball with conflict. When Japan refused to subjugate itself, Kublai Khan got angry and prepared for war. The Mongol Empireball started a war with

Kamakura Shogunateball. Then he built a fleet to get past the big seas to reach Japan. In 1274 CE the First Mongol Invasion landed in the south island of Japan called Kyushu with a part of his fleet and units. He killed many people and Samurai. However, his army was overwhelmed by samurai and his fleet was crushed by a typhoon named Kamikaze (divine wind). In 1281 CE he tried the same thing again. The Second Mongol Invasion fleet and unit size were the biggest in history until D-Day. Part of the Mongol Horde that reached Japan was repelled by samurai of

Kamakura Shogunateball and a Kamikaze destroyed the Mongol fleet again. So the Mongols failed to conquer Japan. Kublai Khan didn't bother with Japan anymore and focussed to invade Southeast Asia. His first invasion was in

Dai Vietball, but he didn't succeed. Then he headed to

Siamball. He didn't fight them because they agreed to gib taxes, so he left them alone. Then he headed to

Myanmarball. First, he sent a letter to forced Myanmar surrender, but Myanmar killed his messenger and prepared a lot of elite forces and thousands of elephants. But he stayed put and proceeded to defeat Myanmar. After that, he headed to

Majapahitball and sent his messenger to force

Majapahitball easily repelled him and made him surrender in Southeast Asia.

Drawing Mongol Empireball is mildly complicated as there are many potential flags: 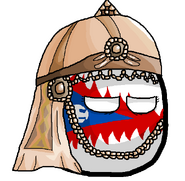 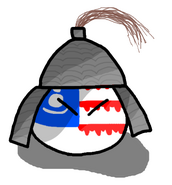