Islam (From the Kazakhs)

Eskimoballs because they also throat sing

Only one that forgave me

All Turkic and other

Taiwanball (who claim glorious Mongol clay is of his clay)

- Remembering his glorious past

- Friendship with the world

khanate you know landlocked countryball in East Asia. It is made up of 21 provinces and one capital being Ulan Batorball, gives a total of 1,564,110 square kilometres, making him the second-largest landlocked country in the world, the world's 18th largest country, and the seventh-largest country in Asia. He is located between Russia in the north and China to the south. He is the forty-third most populous country in Asia and is one of the most unpopular human migration destinations. He can into throat singing, like

He is not a member of many regional organizations, being a poor and sparsely populated country after all. Though he is a participant in OSCEball and a candidate of the Eurasian Union.

With his sparse population, struggling economy, unsuitable land, and tiny military, it is safe to say that the once-mighty Mongol Empire is not as powerful today

His national day is July 11th.

But problem is he has much empty land.

Mongoliaball was born as a

1ball, then adopted by

Bogd Khanate of Mongoliaball, and

PR Mongoliaball and he is Brother of Kebab.

He is also a very conservative country in means of sharing emotions, an example is that he never tells anyone that he has suffered more than 10 genocides from

China, that explains its low population, also he is always a bit sad since he after 1991 his only friends was the USSR and China and he is a very isolated country (his geography makes him an Afghanistan with asteroids).

He also in the 39' in Khalkhin Gol the

Empire of Japanball burned to the ground the Nomohan village and killed 300 people, another case is in 1919 when a tsarist dictator killed 150 people in a Mongol holy lake by burning them.

He also is a very sad ball since he is kinda with a huge regret with his past actions as an empire, he has apologized and asked for forgiveness but only his GF,

South Koreaball, has accepted his apology.

As another fact between 1911 and 1921 he kicked some Chinese and tsarist ass like 3 times, he also has a LOT of gold (the Swiss will love him).

Recently, he began investing in mining, heavily decimating the environment. Rapid modernization has also plagued him, with his capital, Ulaanbataarball, rivaling Beijingball in urban smog severity. The relations between China and Mongolia is getting pretty bad because China started cracking down  on Ethnic Mongolians, Restricting their language, Lying about their culture and even rewriting the Silk Road era saying  "Genghis Khan is our hero he mades China big he mades good thing" which was false they don't even mention about Mongols so the Relations are tearing apart.

US and Mongolia started making some progress in their relations. The relations is getting stronger and stronger 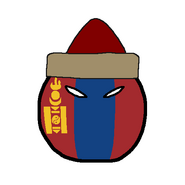 artist: Axxesz
Add a photo to this gallery 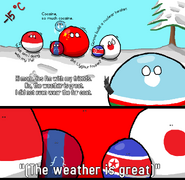 Retrieved from "https://polandball.fandom.com/wiki/Mongoliaball?oldid=1260310"
Community content is available under CC-BY-SA unless otherwise noted.