Yes, but with Soviet help

I am independent and communist. And Genghis Khan is not of importanta anymore for us (Mongolian quote under USSR's influence until 1990).
People's Republic of Mongoliaball was a Soviet satellite state. He became a democracy after the USSR broke up in 1992.

Mongoliaball was born as a 1ball, later adopted by Mongol Empireball and Qingball. Then angered by Qingball, he with Russiaball revolted and became a satalite state of Soviet Unionball. He was threatened by

Imperial Japanball and with soviet he beat him and invaded

Manchukuoball, a Japanese puppet. After the war, he made friends with

Chinaball, who had been building and supporting his economy until Sovietball and Chinaball broke up and I stayed with 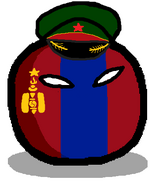 Retrieved from "https://polandball.fandom.com/wiki/Mongolian_People%27s_Republicball?oldid=1248463"
Community content is available under CC-BY-SA unless otherwise noted.