Couscous, Anschlussy, Islamic, Goes apeshit at the mention of Spain

Thank you for not recongnizing western sahara

RedOne and his first ally

, When someone say they are

Western Saharaball and might have some new enemies. But thankful that Morocco is of best allies with

UKball. He is of quite rich. Has best counter-terrorism in the world (FUCK YUO

Algeriaball are also the only North African countries that have

Berber as an official language.

Because of him having a pentagram on his flag, he is often depicted as the devil in Polandball comics (usually wearing a horned headband).

Berbersball. Beginning in 27 BC, it was called Mauretania. The kings of Mauretania became vassals of

Caliphateball and, later, in a colony of

Spainball in the north. He became independent only in 1956

On 1961,the founding father and monarch of Morocco,Mohammed V died,Hassan II took over as king,and he began making friends with the West,causing an failed communist revolution in several cities,In 1963,the new constitution was involved and opposition parties were allowed to gain seats inside the parliament,but 1965,an communist activist Mehdi Ben Barka disappeard in Paris,opposition parties accused the king of taking part of it,as an result he disbanded the parliament and arrested political opponents and in some cases,disappeard,in 1975,Morocco pressured

Spainball to hand over Siguid el-Hamra and Rio del Oro to Morocco,Spain refuses but USA and France pressured Spain and since Spain did not want war and Morocco orderd 350.000 Moroccoballs to go to Sahara Occidental de Espanol (what it was called back then) and annexed them,POLISARIO declared an guerilla war and 1 year later,POLISARIO (Algeria-supported) declared indipendent but its indipendence is not regonized by the UN,the guerilla war ended in 1991 and Morocco took over the Southeren Provinces,although territories occupied by POLISARIO is an occupied territory inside Moroccan soil to this day,In 1979 and 1993,Hassan II (king of Morocco 1961-1999) joined peace negotiations between the Arab World and Isreal,in 1986,Hassan II attempt to normalize ties with Isreal but was met with backlash from the Arab League and the Moroccans,Hassan II decided to withdraw from the agreement but continues to have trade relations with Isreal,in 1999 Hassan II died of pheunomia and heart attack,40 world leaders (UN-general secretary Kofi Annan,US president Bill Clinton,PLO leader,Yasser Arafat,Isreali prime minister Ehud Barak,French president Jacques Chirac etc.) attended the funeral while other leaders payed its condolences at their countries

To this day,Morocco is ruled by King Mohammed VI

Western Saharaball as his rightful clay. Moroccoball also claims Ceuta and Melilla as his.

Russiaball where get defeated by his bitter enemy

On November 16, 2020, he attacked the Polisario firecease with some help of USAball. 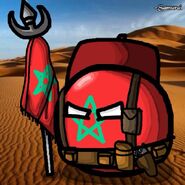 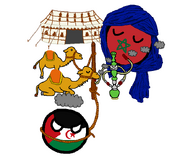 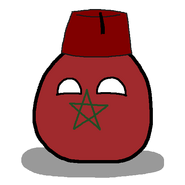 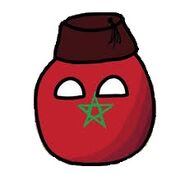 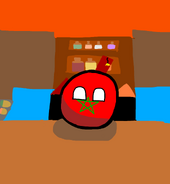 Add a photo to this gallery
Retrieved from "https://polandball.fandom.com/wiki/Moroccoball?oldid=1260386"
Community content is available under CC-BY-SA unless otherwise noted.