Mongul Mongul, Turk Turk, Akbar Akbar
Mughalball, or Mughal Empireball was a Turko-Mongol empireball and is an ancestor of

Afghanistanball. He was the final Turko-Mongol, whereas the rest had died. The Indiasaurs killed him. Sometimes he's drawn as a rawr because of its flag.

Mughalball was born in 1526 and introduced

Islam. It eventually got stronger and stronger and conquered more and more of Indiaball with leaders like Akbar.

In 1628, Shah Jahan became emperor. He built a very nice tomb for his queen, but he also liked demolishing

Hindu temples. In 1658, Aurangzeb came to power. He was the last emperor who led a stronk Mughalball. He also liked destroying Hindu temples. After his death in 1707, the Mughalball was divided and conquered by

East India Companyball, in order to establish Company Raj. The Indiasaurs, such as

Marathasaur, also helped in tearing apart Mughalball and his clay and he ceased to exist in 1857.

Actually there are 2 ways to draw Mughalball 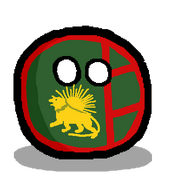 Here, UKball is sitting over him.

Mughalball draw (Second way)
Add a photo to this gallery

Retrieved from "https://polandball.fandom.com/wiki/Mughalball?oldid=1329260"
Community content is available under CC-BY-SA unless otherwise noted.