Trump (Don't call me Nambia or a shithole!)

Initially born in 1884 as South West Africaball, Namibiaball is an adoptive son of Germanyball. He was raised by South Africaball until his rebirth as an independent republic in 1991.

Namibiaball has recently made a video on USAball by insulting itself and satirically pointing out its president Donald Trump, who erroneously called him "Nambia".

Namibiaball has a population density of 3.09 people per Square Kilometer (8.01 people per square mile) Making it the least Densly populated country in africa and the 2nd after mongoliaball.

Namibiaball is the 34th largest coutnry in the world by Area

Namibiaball's history is lost in time. He was a

native and a nomadic hunter/gatherer.

Portugalball discovered him in the year 1485. In the 19th century,

Boerballs arrived from the south and started arguing with

USAball decided to adopt him. After some wars, Namibiaball was split into a

British part and a

Union of South Africaball to "liberate"

Union of South Africaball thought the "liberation" was forever.

Namibiaball eventually had enough of apartheid and became independent in 1990 after some wars.

He is now very peaceful and has a strong GDP per capita for the continent. Dropping oil prices have hurt his economy though. 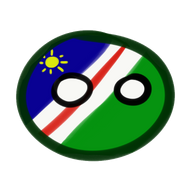 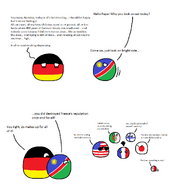 On one of the pictures on the fridge.

Add a photo to this gallery
Retrieved from "https://polandball.fandom.com/wiki/Namibiaball?oldid=1293248"
Community content is available under CC-BY-SA unless otherwise noted.